Participants try to pounce on a running bull and try to grab hold of its hump or horn and move with the bull without falling (Photo: Sathish)

It is a sport believed to date back 2,500 years and is an integral part of Pongal, Tamil Nadu’s key cultural festival. Jallikattu involves controlling a bull with bare hands while holding its horns and hump and this involves intensive training of the bulls, which bull owners start well in advance.

With less than a week left for Pongal, bull owners and tamers are now almost at the peak of their training, with regular training sessions to ensure they are well prepared for Jallikattu this season.

Jallikattu is one of the most traditional and controversial sports played as part of the Pongal celebration and it is observed on Mattou Pongal Day, the second day of the three-day Pongal Festival. During this period, every street in Tamil Nadu is well decorated and locals and tourists alike travel to villages to spot Jallikattu.

Bull trainers train their bulls for over a month before Pongal, through an intensive process where the bulls are trained to swim so that they can gain strength and activity. During this time, bulls are also particularly well fed, and trainers take several precautions to keep their bulls strong and healthy.

â€œWe have four Jallikattu bulls so we train them all together for a month before the event. In the first week of training we only provide them with rice husks mixed with water and a few other things. After a few days, we give them eggs and other rich foods. Twice a day a week we also take them for a swim so they can stay very active and perform well. This continues throughout the training period, â€said Sathish, a resident of Mandaiyur Village, Pudukkottai District, Tamil Nadu. India Media Group.

â€œAt the beginning we get to know the process of handling the bull without any fear and we have to be friendly with them and develop a bond with them. Only after that do they trust us and cooperate with us during the training. Then it becomes easier for us to control them and grab them by the horns and the hump, â€says Sathish, who studies engineering.

During training, a process called mann kuthal also takes place in which the bulls are trained to develop their skills by digging their horns in wet earth and also trained to attack when someone tries to grab their hump. 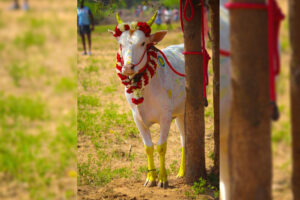 Jallikattu bulls are decorated for the event (Photo: Dinesh)

In the early days of this sport, Jallikattu also became an opportunity for the women of the village to choose their husbands whom they found the most courageous of all and who managed to tame the bulls. Now, however, it has turned more into a challenge sport where young and even old people prove themselves by wrestling bulls.

Hundreds of men chase the bulls and try to hold their horns and hump, battling the hardened bulls that have been bred in the wild, well fed and also intensively trained to make them tough and fit for battle during of the event.

â€œBefore the event we train the bulls on the ground where the players also participate and practice for the last day. When a group of people try to control the bull, he gets angry and starts running and attacks them. Twice a day for a week, they run these training sessions to prepare the animals as well as the humans for the last day of competition, â€says Sathish.

Three days before the event, tokens are given to the tamers as well as to the participating bulls. A proper medical examination is performed where the weight and general fitness of the participants as well as the bulls are checked. â€œThe bull registration process begins three days before the event. The person who wishes to participate in the sport receives an appropriate medical examination and his weight, age is also checked, â€explains Sathish.

He says that for tamers, the training period is crucial to ensure that even if the bulls are properly fed, they should not overeat. â€œThe bull shouldn’t gain weight during training for the event, otherwise he wouldn’t be able to run during Jallikattu. One day before the event, the bulls are taken for a swim and they are decorated for the next day. Their food intake is also reduced before the event, â€says Sathish.

For the safety of participants, the sharp horns of some bulls are blunt.

The day of the Jallikattu event varies from district to district, but the most important is Pongal week. Due to the restrictions of Covid-19 and in accordance with the order of the state government, in 2022 Jallikattu the number of players cannot exceed 150 during the event and the negative Covid-19 certificate is returned compulsory for all players. The number of viewers was also restricted to 50 pc of the rally this year. 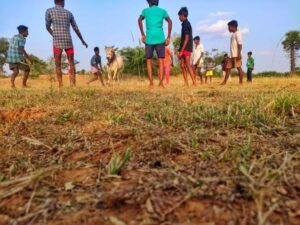 Bull trainers train with their bulls for over a month ahead of Pongal (Photo: Sathish)

The main objective of the sport is for participants to jump on a running bull and try to grab hold of its hump or horn and move with the bull without falling. The person who wins each round and plays until the last round is considered the winner.

â€œThe event begins around 8 am and continues until 5 pm in the evening. Jallikattu is really a risky game because when trying to subdue a running bull we often fall under the bull’s paws and injure ourselves. When the bull is let loose in the middle of the crowd, a group of people try to control it with their bare hands and people try to hold on to the bull by grabbing its hump and try to tire it out and defeat it, â€says Sathish Kumar. . , who works as a web designer in Pudukkottai tells India Media Group.

Although it is a highly anticipated sport for many in Tamil Nadu, in the recent past it has also had its share of detractors who say it is cruel to animals and many of them as well. that some participants were injured or even killed during the competition.

In 2014, the Supreme Court (SC) banned Jallikattu after a plea was filed by the Animal Welfare Board of India and the People for the Ethical Treatment of Animals (PETA). As the order sparked massive protests in the state, the government of Tamil Nadu insisted that Jallikattu was a crucial part of the state’s culture and identity and it changed the law to bypass the order of the highest court and the ban was lifted in January 2017.

Participants say they have now improved medical care to ensure injuries are minimized and animals are properly treated before, during and after the event.

â€œEach year a medical team and a team of vets stay on site with an ambulance to rescue the person if someone is injured during the event,â€ says Kumar, adding that it requires good training and a quick reflex. to catch the bull, adding that he has been participating in the event for two years.