This design proposal for the Apple car makes your idea of ​​a motor vehicle obsolete; Much like the American tech company did with the 3.5mm jack on its latest iPhone – or the buttons on the original.

Designed for Apple’s centenary 60 years from now, this daring project follows one of the late Steve Jobs mantras of focusing on simplicity and minimalism. Ali cam, the professional designer behind the Apple Car 2076, has created not only a rendering, but a whole story of philosophy for the company, imagining how it will evolve until 2076.

The study significantly changes the basic concept of what we currently perceive as a car by adopting advanced driving systems, including a magnetic field driven powertrain that uses the principle of maglev (magnetic levitation) to create both the lift and propulsion.

This means there are no wheels, batteries or motors / motors to take up space, providing occupants with a tech lounge at their disposal. The study does, however, have a separate ‘easy access luggage’ trunk, which technically makes it a sedan).

The vehicle’s cabin opens via a tactile ID sensor, while the interior itself is packed with Apple tech, including gesture control. It also comes with smart glass technology, in which the light transmitting properties are changed when voltage is applied, changing it from translucent to transparent.

Of course, the vehicle is fully autonomous; remember, this is 2076 we’re talking about. No matter what the Apple car might look like at that point, or if it will even exist, it’s a dead certainty that humans won’t be the ones to drive.

Special thanks to Ali Cam for the pictures! 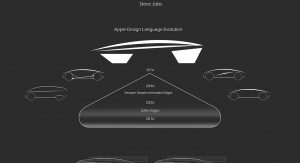 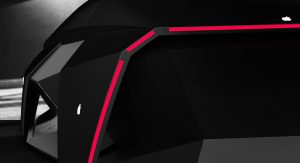 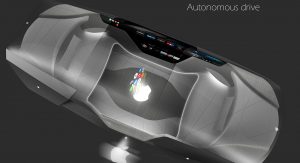